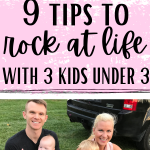 Our first baby was 18 months old when we found out we were expecting another baby! Just a few short weeks later, we had our first ultrasound and got the news that there was not ONE, but TWO little people growing inside my belly. We were about to enter the wild, chaotic, and JOYFUL club of having 3 under 3: twins and a toddler!

Our identical twin girls were actually born almost 2 months prematurely, foiling my carefully crafted timing to NOT have Birthdays too close together. Seriously, their Birthdays aren’t even 3 weeks apart!

Not only did we have three kids under 3… we had preemie newborn twins and a JUST turned two-year-old. If you’ve parented a two-year-old before, you know that a lot happens developmentally and that there is a drastic difference between a just turned two-year-old, and a two and a half-year-old.

We had 3 in diapers.

To say that our house resembled a daycare would be putting it lightly! But you know what? It was only a year. We did it, we survived it, and dare I say, we rocked the 3 under 3 life (and might have been crazy enough to have a 4th baby…) and you can, too!

1. Structure, Routine, and Schedule for Twins and a Toddler

We all have different ideas of the right amount of structure. I have some mom friends who have their day scheduled down to the minute, others who just have a loose routine, and others who have no semblance of routine at all.

No matter where you fall on the spectrum, I can promise you one thing. When you have 3 under 3, structure and routine are your best. friends.

My view on structure and routine vary by the season I’m in. Before my 4th baby was born and my older kids were 4 and 6, we had a pretty lax order of our day. We had outside play sometime in the morning and rest time sometime in the afternoon.

But when I had 3 under 3? Our day was scheduled down to the half hour. Not quite the minute, but close!

It was crucial and I’ll explain why.

I was exclusively pumping and that meant that several times a day I was strapped to my pump or bottle feeding my twins and unable to keep an eye on my two-year-old.

We did very minimal screen time before the age of two (we actually had zero screen time at all until he fractured his leg while I was pregnant with the twins and we were desperate for ways to entertain him).

I had one scheduled slot of television during the day as well, but to be honest, since we were pretty new to screen time, it didn’t hold his attention for longer than 15-20 minutes or so.

This meant that I could wake the twins up at 7:00, give them a bottle, and put them back down for a nap at 7:45. Since they were preemies, they were very sleepy and needed a lot of sleep to help them grow and develop.

You can read more about preemie sleep needs in this post.

From 7:45-8:00 I could make coffee (CRUCIAL), and prepare Theo’s breakfast. I’d then get him up at 8:00 and we’d have about 2 hours to have breakfast and get ready for the day together where he had my undivided attention. When the weather was nicer we had a really nice routine of having breakfast and then he’d play outside and I’d sit in the sunshine and enjoy a 2nd cup of coffee. See? Perks of a routine. Fresh coffee!

Schedule for Twins and a Toddler

Simplify Where You Can

Simplify is me trying to find a more eloquent way to say find a flipping shortcut and don’t try to take on too much with 3 under 3.

If you can help it, now is not the time to be tackling home renovations, moving, or starting out on a new business venture. I had the inkling to start blogging and decided to wait until my twins turned one because there was no way I could handle one more thing.

I’d even suggest not adding anything like potty training to your plate unless you are absolutely sure that your little one is ready for it. We potty trained Theo when he was 2 years and 10 months and the girls were 10 months. We took the long weekend of Thanksgiving and did the three-day potty training method and it worked brilliantly. I’m definitely glad that we waited until he was absolutely ready because the transition was so smooth.

If you have it in your income, do not feel guilty at all for hiring help! Here are some ideas for you:

We didn’t have much extra income when our kids were younger, so hiring help wasn’t an option for us. We did have a mother’s helper come a few times a week though. We paid her $5 an hour and she pretty much helped feed the babies, wash bottles, or play with Theo outside.

Independent play is a crucial part of child development. It’s so important for children to learn how to play on their own so they can be creative and develop their imagination. If we’re constantly entertaining them, they can’t do that.

There’s a wonderful concept that’s talked about in one of the Babywise books called independent playtime. Independent playtime is when your child plays on their own (obviously in a child-proofed room) for a small amount of time each day.

We have done independent playtime with our 3 older children since they were toddlers and it has had amazing benefits. Having 3 kids so close in age will lead to some beautiful play and lots of sibling love… but it also leads to a lot of fighting. I found that my kids just needed a little bit of space from each other! After 45 minutes of independent playtime each morning, everyone was much happier.

How We Started Independent Playtime and the Amazing Benefits

How Long Should You Be Doing Independent Playtime For?

Embrace the Season of 3 Under 3

It’s a crazy season, so go ahead and embrace it. I once had the manager of a grocery store give me a gift card and tell me that I was their customer of the week. I’m pretty sure it’s a term he made up and just wanted to acknowledge the fact that I was grocery shopping with 3 tiny humans BY MYSELF.

We got plenty of rude comments, but also a lot of sweet attention and people complimenting our family. We learned to smile and embrace it!

Part of embracing the season of 3 under 3 means accepting the fact that life is going to be a bit more messy and chaotic than you’d like. Give yourself permission to let things go and don’t feel any guilt about having a messy house or ordering takeout for the 15th night in a row.

Know That It’s Only a Season

Something that really helped me to be OK with letting things go was the knowledge that it was only a season. Just because the laundry was constantly overflowing and there was an inch of dust on my baseboards during this season didn’t mean that it would be this way forever!

As mothers, we can do it all, but we can’t do it all, all the time without sacrificing ourselves.

Embrace this season, know it’s a season, and allow yourself time to do something for yourself!

I am a huge believer in prioritizing your marriage as a solid foundation for raising children. After all, your children will leave the nest, but you will be with your spouse for life (hopefully!).

It’s a time for all hands on deck, survival mode.

So just remember your spouse. When your husband snaps at you during the witching hour with twins, give him grace. If you snap at your husband from the stress of trying to potty train your toddler, remember to apologize. And hopefully, he will remember the grace you’ve been giving him and have the same grace with you.

Related –> How to Have a Happy and Thriving Marriage After Twins

Remember That Siblings Are the Best Gift

I won’t lie, there were definitely moments when I felt that having three children so close in age wasn’t fair to them. I felt as though I couldn’t give them as much as they needed because parenting three people who have little to no independence is really hard.

But here’s the thing.

As my girls got a little bit older, the bond they developed with their big brother was absolutely incredible and I realized how lucky my kids were to have each other.

So, my dear mama friend, please listen to me very carefully.

You are doing a great job. You are enough. It may be really hard right now, but I wouldn’t change having 3 under 3 for the world.

My kids are older now (Theo is 7, Josie and Margo are 5, and if you can believe it, we have another baby, Beckham, who is 10 months!) and there are times that I really miss those early days.

You are so brave. I am expecting twins now and I find it super stressful. I have the book for every occasion - for newborns soon and for sleep training toddlers for Josh (both books from Susan Urban). Although having those and having everything under control is not exactly the same, right?

Omg that is so much planning! I don't believe anyone can handle this. And exactly when I was calming down it turns out that Bob is having sleep regression I think. We're following the rules from this book: https://www.parental-love.com/shop/toddler-sleep-training and for now it looks pretty good again. Although I am super stressed about the next baby coming, I cannot imagine how you handled more! Thanks for all the tips and remember - you are amazing!