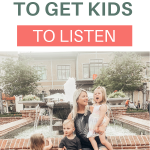 Josie and Margo, my three-year-old twins, and I were walking to pick their brother up from preschool when it happened.

They were running a little bit ahead of me on the sidewalk, when I saw a car backing out of the driveway, just a few feet from them.

Having children listen the first time. is. so. important.

I’m not even going to discuss what could have happened if they hadn’t listened to me when that car was backing out. Or if they decided to just run a little bit more, and then stop.

As a mom to twins (plus one!), I am always outnumbered. Knowing that my children are going to listen when I tell them to stop or go or get into the car is a vital safety concern.

I don’t mean to be dramatic, but when we get out of our van in the middle of a busy parking lot, I literally can’t stop my children from running off if they want to.

I need to trust that they’re going to listen to me and follow the rules. Our rule when we get out of the car is that every child puts their hand on the door and waits for me. They aren’t allowed to take their hands off the door until I say so.

If they do? We leave. So far, I’ve only had to leave the park once. It was really sad because it was a gorgeous day, and it wasn’t fair to the other two children who were listening.

But first time obedience is not something I’m willing to back down on.

Now, this doesn’t mean that they always listen. Hardly. They are children after all. What it means is that it is something we work on every single day. Here are my tips for first-time obedience and teaching children to obey.

How to Establish First Time Obedience

1) Focus on the Heart

First and foremost, I am always concerned about my child’s moral compass. My goal as a parent is to raise my kids to be happy, kind, humble, loving, and responsible adults.

Responsible adults follow rules, and breaking those rules usually results in a bigger consequence than as a child!

So, while I want them to obey for the sake of obeying, I also want them to follow rules because they know in their heart it is the right thing to do. This is much harder to teach than listening on the first time.

I don’t want to be such a harsh disciplinarian that my children obey simply to avoid a consequence.

I want them to obey because it is the right thing to do, and also because they care about what I think, value my opinion, and have respect for me. How on earth does one accomplish this?

How to Build Up the Heart

This doesn’t have to be extreme… but my kids love dinosaurs. It takes only a few minutes to talk to them about their favorite dinosaurs that I honestly could care less about. I care about them because my kids do!

Read –> Bonding With Your Kids With Quality Time at Bedtime

We also should focus on showing them grace. While we should have high expectations, our children are people who make mistakes, just like we do as adults. We have to have grace, just as they have grace with us when we mess up.

And most importantly, we have to praise their good behavior. If we get on to them when we disobey, we should also get on to them (in a good way!) when they DO obey.

Read –> Transitioning Your Parenting Focus From Negative to Positive

Other Helpful Parenting Posts to Read…

Always set the expectation. Whether you’re going to a fancy restaurant or for a walk to the park, make sure your children know what you expect of them, why you expect it (if it’s appropriate), and the consequence if they don’t listen.

3. Explain in the Moment

Explain the rules the moment. I don’t mean as they’re breaking them, but as you’re enforcing them!

For example, when we walk to school, I am constantly saying things like “You stop when mommy says stop. That keeps us safe.”

Wouldn’t it be great if we could just say “because I told you so!” and be done with it? It would make parenting much easier.

Read –> When It’s Appropriate to Say “Because I Said So”

However, as nice as it would be, I don’t want my children to be little robots who don’t question anything. I want them to think for themselves. I am fine with explaining the “why” behind our rules.

There are also times when I don’t give an answer and simply say “because I’m the mommy and you have to trust me.”

Josie and Margo are only 3, and don’t really understand safety. Theo, on the other hand, is 5, and he totally gets it.

I constantly tell him that rules keep him safe.

Read –> How to Stop Your Toddler From Running Off

What happens if your children don’t obey? There has to be a consequence, otherwise, most times, they won’t bother to listen.

It doesn’t have to be a drastic consequence, but they need to understand that the parents mean what they say!

The best consequences are logical ones.

If your child didn’t listen when you told them it was time to leave the park, they lose the privilege going to the park the next time.

If they didn’t get ready for bed when you asked them to, the next night have them get ready 30 minutes earlier.

The consequence doesn’t have to be harsh, especially if it’s the first time they haven’t listened. However, if it becomes a persistent problem, behavior boot camp might be a good thing to try!

5) Say Yes More Than You Say No

I mean, this obviously doesn’t apply if your kids are constantly asking for unreasonable things.

But if we want our “no” to be powerful, we need to save it for when it actually matters.

Just a few days ago, I was making English Muffin Pizzas with the kids. Theo asked me if he could try the cheese and sauce by itself. We have a general rule that we don’t eat condiments or sauces alone. They are meant to go on things!

But we were having a fun night making dinner together… and he asked instead of just eating it! So, I told him yes. Because does it really matter? I don’t want to waste a “no” on something like that.

First time obedience takes time and is something to always be striving towards. Have realistic expectations, because children aren’t perfect!

What an excellent post! I've often been told that I am too hard on my girls for expecting them to obey the first time. It is so refreshing to hear someone else say the same things! I will definitely be following your blog :)