Identical Vs Fraternal Twins and the Different Twin Types

We are constantly asked if our twin girls are identical or fraternal, usually with about 100 other personal questions.

People are just fascinated with multiple births.  I sometimes don’t mind the questions, and the babies enjoy the attention!

However, other times we are in a hurry, the babies are dangerously close to hangry, and I can see Theo becoming increasingly upset by the attention his sisters are getting.

It sure would be nice to be able to answer with a simple “they’re identical” or “they’re fraternal” and be on our way.

We finally decided to get a DNA test done, and I’ll be sharing the results at the ends of this post.

I’m gonna share with you guys today some information about twins.  Everything I know comes from books that I’ve read.

I’m not pretending to be an expert, so if I got something wrong, don’t call the science police.

There seems to be a lot of confusion regarding identical vs fraternal twins.

The common misconception is that if twins share a sac and placenta they are identical twins, and 2 sacs/placentas = fraternal twins.

THIS IS NOT TRUE.  I even had nurses in the NICU swear to me that they were identical.

Upon finding out that there were indeed two sacs and two placentas, they would remark at how similar they looked for being fraternal twins.

Can identical twins have separate sacs and placentas? Yes. Yes, they absolutely can. There needs to be more widespread information regarding twin births!

I have been asked so many questions, so I am going to just answer some of them right here.

How are twins made? Read below 🙂

Do identical twins have the same blood type? YES, always.

The Difference Between Identical and Fraternal Twins

The only way to be 100% certain if same-sex twins are identical or fraternal when they are in separate sacs in the womb is to have a twin zygosity test performed.

My husband and I went back and forth on whether we should get the test or not.

I finally couldn’t take it anymore, and he agreed, so we sent away for a test kit (Proactive Genetics).  We swabbed their cheeks, sent them off, and waited less than two weeks to get our results!

However, twins can still be identical if they have their own sacs and placentas.

I’m not going to get into all the science here, because… I just don’t feel like it.  I’ll just give you a brief little lesson 😉

Many people don’t know how identical twins occur. Identical twins that are conceived from one fertilized egg are called monozygotic twins.

Monozygotic is just a fancy, sciency word that literally means: identical, from the same egg.

Fraternal twins are conceived when the woman’s body drops two eggs at the same time. They are called dizygotic twins, meaning nonidentical and from two different eggs.

Related: What to Put on Your Twin Registry

Aside from identical and fraternal, there are different types of twins depending on how they are positioned inside the womb.

If you’re having twins, it’s definitely interesting to know about the different types of twins.

A twin pregnancy is also considered high risk, and you can use a due date calculator to figure out when they will arrive- anywhere from 2-8 weeks early.

Most commonly known as Di Di twins, they can be either identical or fraternal.

It means that the babies each had a seperate sac and placenta inside the womb and as far as twin pregnancies go, they are the lowest health risk. Josie and Margo were di/di twins.

Referred to as Mo Di twins, they share a placenta but each has their own amniotic sac. Mo/Di twins are always identical. They are in the middle when it comes to the risk factor.

Read –> How to Increase Your Chances of Conceiving Twins

Monochorionic twins (abbreviated as Mo Mo twins) share both a placenta and amniotic sac. These are the highest risk type of twin pregnancy and are also always identical.

Both Mo/Di and Mo/Mo twins are at risk for twin to twin transfusion syndrome.

Twin transfusion syndrome is when one of the babies is taking all of the nutrients through the placenta, and the other baby is getting none. This is a risk due to a shared placenta.

There are also polar body twins and conjoined twins, which are very rare, especially in the United States.

Read –> How to Survive a Twin Pregnancy

Facts on Josie and Margo

(You can read about my twin birth story here, how I got them to sleep through the night here, and see their 1-year-old pictures here.)

What do you think?? 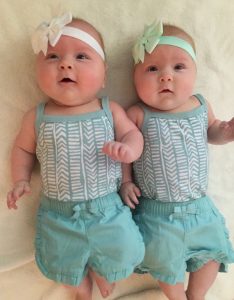 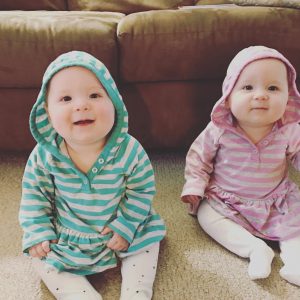 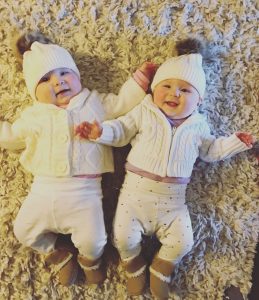 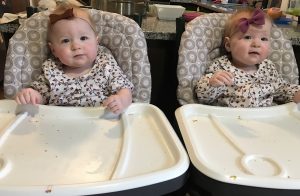 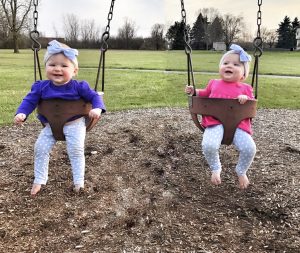 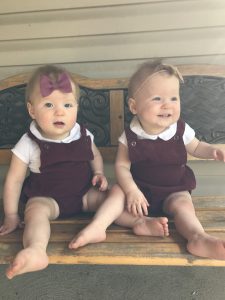 A DNA test has confirmed that Josie and Margo are identical {mirror image} twins!

There is no official test to determine if twins are mirror image or not, it is just based off of their physical characteristics.

There was so much fascination about mirror image twins that I wrote an entire post that you can find here: Mirror Image Twins Facts. I go into detail about everything I’ve noticed with my girls, as well as lots of pictures.

Josie and Margo have cataracts in opposite eyes, and their teeth have always come in at the same time, yet on opposite sides.

See that little dot in the middle of her right pupil?

That’s her cataract, and Margo has one in the middle of her left pupil.

We have checkups with a pediatric ophthalmologist every few months, but so far, they aren’t causing issues; they’re just like a birthmark!

So there you have it, folks!  I’m so happy that we finally know.  Are you surprised by the results?

They both are soo cute twins 😍

My twin girls are 22 months old and I just think they look so different and had kinda decided to not do the test. Until recently a friend of mine with identical (test proven) twin daughters said she thinks my girls look more alike than hers do! And I was wondering how she can tell hers apart! And after reading this yet, now I'm thinking we might need the test after all. I do need to look my girls full in the face to see who is who.... :) twin mom problems :)

What an interesting post! You've taught me something new. :) Your girls are ADORABLE, too! :)

My Failed Twin Breastfeeding Experience...and Why I'm OK With It - Rogers Party of 5

[…] if they’re identical or fraternal twins?  Read this post to find […]