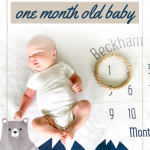 Here is Beckham’s 1 month summary and what you can expect from a one month old baby with eating, sleeping, and developmental milestones. I’m also going into detail about how things are going using the Moms on Call 1 Month Schedule.

Beckham turned one month on May 17th (I am sooo behind!!) and it also marked the end of my husband’s paternity leave. For real guys, having him home for four weeks was seriously amazing.

What to Expect with a One Month Old Baby

Beckham is still nursing every 3 hours throughout the day with a bedtime bottle of pumped breastmilk at 8:30.

He is still nursing for a good solid 30 minutes and it really seems to tire him out. We have an appointment to get his tongue tie snipped on April 20th and I’m hoping that helps him to be able to nurse more efficiently.

A one-month-old baby should be able to handle being awake for 45-60 minutes between naps during the day, including when they’re eating.

45 minutes is really on the low end, but some babies have higher sleep needs.

It will feel like your baby sleeps alll the time. That is completely normal and good!

They will likely still be really sleepy and sometimes have trouble staying awake to eat!

Beckham still has days where he just doesn’t want to wake up and will pretty much sleep through his feedings and not have good awake time.

I do my best to wake him up, but as long as he wakes up enough to eat, I don’t worry about it too much. I mean, I definitely do my best to give him wake time, don’t get me wrong! I just don’t overly stress it.

At one-month-old, it is common for your baby to begin giving you a 4-hour stretch overnight. If they’re still waking up every 3 hours, that’s common as well, so don’t fret. Continue to be consistent about creating good sleep habits, and it will come.

If they are going for longer stretches in the middle of the night, that is fine, as long as they are gaining weight.

At one-month-old, Beckham started giving us 6-hour stretches in the middle of the night! I actually set my alarm to wake him up because I was nervous to let him go for longer than 6-hours without checking in with the pediatrician.

At his one month well check, he was gaining weight really well and our pediatrician said it was fine to let him go as long as he wanted to overnight. Woot woot!

As I mentioned above, a one month old baby can handle being awake for (at most) an hour. This means that they should be taking a 2-hour nap after each feeding cycle to keep them eating every 3-hours throughout the day.

At one month old, Beckham was consistently waking up from his naps early.

I speculated that he was waking up early out of hunger, due to not transferring enough milk because of his tongue tie.

However, I also knew that if I fed him right when he woke up, he wouldn’t be quite hungry enough to have a full feeding and the cycle of waking up early would just continue.

So instead of feeding him, I’d put him in his swing with a pacifier and he’d be totally content… but he wouldn’t usually go back to sleep.

Side note on that topic: I wouldn’t do this if he spit out his pacifier and kept crying, indicating that he was *really* hungry. I also wouldn’t do this with a baby younger than one-month-old, or a baby who wasn’t gaining weight well.

What I forgot to calculate was adjusting his awake time if he woke up early. So if I fed him at 10, I’d still put him down for a nap at 11, completely forgetting that he might have woken up at 9:30.

That was giving him 90 minutes of awake time, which is far too much for a one month old. What happens when babies are overtired is that they tend to wake up early.

It doesn’t make sense but it is so true!

Once I realized what was happening, I made sure to keep his wake time to one hour. This meant that he would pretty much nurse and then go right back to bed!

Once I started doing this, it fixed the problem immediately. I kid you not.

If your one-month-old is consistently waking up from their nap EARLY, try shortening their wake time.

It seems counterintuitive, but it works!

Beckham is mostly napping in his crib. We still have about one nap per day where he can’t settle and so he will nap on me (which I LOVE!) or in his swing.

I don’t worry about it forming a habit at this point because 90% of the time he does so well in his crib!

As I mentioned in a previous post, we have always done Babywise with our babies. This time around, we are doing a myriad of Babywise and Moms On Call and are having really good results.

The difference in the Moms on Call 1 month schedule vs the 2 and 3-week schedule is pretty much that bedtime is bumped a half an hour earlier.

I was nervous that he would wake up earlier, but he actually started sleeping longer, just as the book predicted!

You can read more about Moms On Call in this book <— It is sooo worth it!

A one month old can focus on things that are about 8-12 inches away.

They still prefer things that are black and white or high contrast patterns.

And their favorite thing to look at? Human faces! So soak up all of the baby snuggles because they love looking at you!

At one month old, your baby should be able to start to turn their head from side to side during tummy time. If they hate tummy time, try starting with very small increments and increasing it every day.

They should be gaining more head control, but still won’t be able to support their head completely on their own.

Beckham is starting to be really good at holding his head up on his own!

Beckham at One Month

The biggest thing that happened at one month (a day before he turned one month, to be exact!) is that Beckham finally got to meet my mom, brother, sister, and brother in law.

Cue alllll of the happy crying faces and heart eyes!

Because of the pandemic, we have all kept our distance. My mom had actually stopped by one time to drop off some masks she had made for the kids, so she technically saw Beckham, but kept her distance and wore a mask.

This time, we met outside at my sister’s house. Since we were outside, we didn’t wear masks, other than when they held the baby.

The older Beckham gets, the more I realize just how easygoing and happy he is. I keep waiting for him to hit his “fussy” phase, and so far, he really hasn’t.

Even when he wakes up from a nap early, he will just lie in his swing, perfectly content.

We haven’t had any moments where we’ve had to pace around the house trying to comfort him, like we had with all of our other babies. 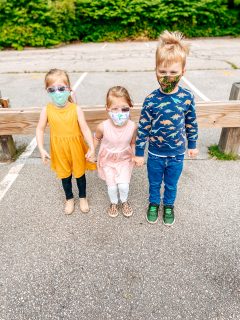 Previous
8 Tips to Get Your Kids to Wear a Mask 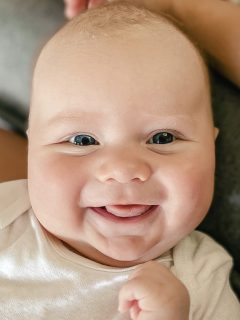 Next
Moms On Call Soothing Rounds: How to Get Your Baby to Sleep Longer at Night
Click here to cancel reply.