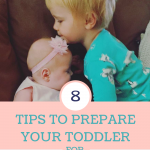 How to Prepare Your Toddler for a New Baby (or two!)

Our first child, Theo, was only 18 months when we learned that we were having twins.

We would be bringing home not one, but two babies, and were a lot panicked.

I have outlined everything that we did below, to make things easier for you.  I’m not saying we are perfect parents, but we never had any issues with Theo being jealous or resentful of his sisters.

We have plenty of issues with him now that he is 3 and a tyrant, BUT that is a different subject entirely!

How to Prepare Your Toddler for a New Baby: Pre Baby

No big changes within 90 days

Children thrive on routine and consistency.  Try to avoid any big changes within the last 90 days of pregnancy and the first 90 days of bringing home the baby.

It may seem like a good idea to transition to a big-kid bed or begin potty training, but it is better to wait.  If we had transitioned Theo into a big-kid bed, it would have been absolutely disastrous.

This being said, life happens… if you really don’t want to buy a new crib, and transition your toddler into a big-kid bed, that is your call.  I’m just warning you, once they are out of their crib… they will get out of bed… all.the.time.

Related –> How to Handle the Crib to Bed Transition

It seems obvious to get a big sibling book, but it’s so important that I couldn’t leave it out.


Since I was on bedrest during my pregnancy, we couldn’t do many of the things we wanted to do with Theo.  Since the babies spent some time in NICU, I got to spend one-on-one time with Theo before they came home.

It was a special time for us since I had been in the hospital for two weeks.  The day before we thought the girls were coming home, we had a special day out, just the two of us.

We went to the bookstore and I let him choose two books.  One book that could be anything he wanted (he chose a truck book of course), and one big brother book.

He really had no desire to pick out a big brother book, but I forced him.  We ended up with this one because the author has a potty book that Theo loves.

We also went to this little ice-cream place that has indoor play equipment.  It was such a fun day!

We also got Theo two baby dolls.  He wasn’t that into them, but sometimes when I was feeding the girls, he would get one out and give it a pretend bottle.

Since the girls were born two weeks after Theo’s birthday, which is a month after Christmas, he wasn’t lacking new toys.

I’m pretty minimalist when it comes to my kids and toys anyways, but I wanted to get him something from his sisters that he would be excited about.

We ended up getting him a small, inexpensive toy police car from Target.  He loved it and still has it.  Don’t feel like you need to get the perfect, most sentimental gift for your child from the babies.  There’s a 10% chance they will be interested in it once the novelty wears off.

We also had Theo choose stuffed animals for his sisters from Pottery Barn Kids.  His special animal, Lambie, is from PBK, and we thought it would be meaningful if he picked animals from there too.

He had way more interest in playing with the toys than picking out stuffed animals and had a total meltdown when we left.  Also, his sisters don’t care at all about their stuffed animals, even though they are in their cribs with them every night (starting at an appropriate age, of course).  They do, however, love Theo’s Lambie. I don’t get it!

Talk Up Being a Big Sibling

We would frequently remind Theo that many of the fun and cool things he liked to do were for big boys only, not babies.

When he ate something he really liked, we told him that this special food was only for big boys.

We tried to make it fun and exciting and make him feel privileged to be a big brother.

Also, Remind Them They are Still Your Baby

It must be confusing and sad to a child to no longer be mommy and daddy’s only baby.

Everyone suddenly talks about how you are a big brother/sister and a big kid.

But you’re supposed to be the baby!

While it was important for us to talk to Theo and excite him about being a big brother, I also reminded him frequently that he was still our baby.

He was only 18 months when we started talking about the babies coming, and just over 2 when they arrived, so he really was still a baby.

If your child is older, and you don’t want to call them a baby, perhaps you could remind them that they were your first baby.

After Baby is Home

We tried to be very sensitive to Theo’s needs when we first brought the babies home.  He is a very sensitive and emotional child and at the time was actually scared of babies.

He had to learn that this was his new life and adapt to having two babies living with him, but I also didn’t want him to have to see them and hear them every single second.

This wasn’t fair to him and hurt his feelings, so I changed my tune.

One simple thing that helped, if Theo needed something, and the babies were fed, I told the babies that they had to wait.

“I can’t pick you up right now, love.  Your brother needs me. It’s time to make his lunch!”

Now obviously the babies had no idea what I was saying, but Theo did!  It reinforced to him that I was still there to take care of him.

Instead of saying no when he asked for something, I would tell him when his request would be possible.

I avoided using the word wait and instead said something like “I’d love to read to you, but right now your sisters are very hungry and need their bottles.  During their nap, I would love to read to you.  Can you play with your new trains while they drink their milk?”

I also tried to word everything in a positive voice.  Instead of saying “stop being so loud” I would say “let’s use our indoor voices” or “our voices aren’t for yelling” (This book has been extremely helpful in teaching Theo about using his indoor voice.  This mama has no patience for yelling inside!).

All of these tactics weren’t to spoil him, and I understand that children need to learn the words ‘no’ and ‘wait.’  However, I wanted to ease him into this new world without growing resentful of his sisters.

Don’t Always Have the Baby in the Same Room

My babywearing mamas might not like me for this one, but I’m just sharing what helped us!

I put my twins on a schedule fairly early.  When they were in the really sleepy phase, they napped downstairs, but in a different room than we played in.

Once they outgrew the sleepy stage, they slept in their room exclusively.

The babies demanded everyone’s attention while they were awake.

Not having them in the same room as us 24/7 was nice for Theo.  This might not work for everyone, sometimes the only way to get a newborn to sleep is by holding them or putting them in a swing.

Some moms might not be comfortable having their baby in a different room, and that is totally OK!  Even if you start with 1 nap a day in their room, you can have some one-on-one time with your firstborn.

Let Them Be Your Helper

Toddlers love to help!   I had Theo help me with so many things when the girls were really little.  He helped wash bottles, empty the dishwasher, put diapers in the garbage, etc.  His favorite thing to help with was to feed the babies.

I hope that you find this helpful if you’re about to bring a new baby home!  If you’re in the been there, done that camp- was there anything I didn’t mention that worked for you? I’d love to hear about it! Drop it in the comments 🙂

These are great tips. My little one is about to turn 2 and tbh I'm not sure when the next one will come. But I definitely see how these tips are helpful, if and when the time comes I will definitely implement them.

As of now I'm done having babies, but you never know if something will happen and I might need to read this again! When I had my youngest we implemented a lot of these tips, including siblings gifts. Great ideas!

I had my son when my daughter was 2 years old and I really wish I had this post before then! Luckily, we did have an easy transition and she is a great big sister. This is very informative, organized, and easy to understand. A toddler, twins, and a blog.. Go You!!!

Great list. I can't imagine bringing twins home! Our next baby will be coming right after our current baby turns 2, so we are just starting on some of those 'big kid' transitions.