Our first born, Theodore (Theo) was born on January 22nd, 2014.  Theo brought so much joy to our lives, and we knew we wanted more children.  I’ve always said I wanted 3-5, and Ben…well, he has never really given me a solid answer. Heh.  Anyways, when we decided to have a 2nd baby, I planned it out perfectly.  I ordered an ovulation kit, so I would know exactly when I was ovulating so that I could get pregnant exactly when I wanted to.  My well thought out plan was that I wanted about a two-year age difference between my first two, but I didn’t want their birthdays too close together.  It’s a lot of work to plan Birthday parties, and I wanted them to have their own special time not shared with a sibling.  Looking back, it seems silly, but that’s how I felt at the time.

The night before I tested positive, Ben and I got into a HUGE fight… over nothing.  I remember him telling me how mean I was being over something so small, and I immediately knew- I just KNEW that I was pregnant.  The next day was our anniversary, and I was planning on waking up early to take a pregnancy test. If it was positive I was going to surprise Ben by putting a big brother T-shirt on Theo.  I had to hide my smile because I didn’t want to spoil the surprise and somehow managed to apologize for my over reactions without giving away that something was up.

Sure enough, the next morning, my test came back positive.  Even though I had a pretty strong feeling, I was still shocked, and overjoyed! I was also incredibly nervous because our little life was pretty great, and going back to sleepless nights was something I was not looking forward to.  Still, I was pretty happy with how our plan had turned out; there would be around 2 years and 2-3 months between the kids- exactly what I wanted.

Fast forward four weeks, and we are at my first prenatal appointment.  Ben was sitting on the floor with Theo feeding him snacks and trying to keep him entertained, and we were chatting with my doctor (he was the same one who had delivered Theo).  I thought I was around 8 weeks pregnant, and my Dr. always does an ultrasound at the first appointment for dating purposes.  Right before doing the ultrasound, my Dr. said, “let’s do an ultrasound and make sure there’s only one baby in here.” I rolled my eyes and said, “Oh please, twins don’t run in my family.”  As he was performing the ultrasound I said jokingly “there’s only one baby in there, right?” and was met with silence.  I repeated myself, and finally, my doctor said “Well, see this one heartbeat right here? And wait…wait, look over here, there’s another one! There are two heartbeats. You’re having twins.”

I started hyperventilating, while Ben sat on the ground exclaiming “oh, what a blessing!” I almost punched him.  Hundreds of questions flew through my mind…. Would I ever sleep again? Would I be able to have a vaginal delivery? How were we going to afford to add two babies to our family? Was I going to be huge? Were we EVER going to sleep again??

We were still reeling from shock on the drive home from the appointment.  Actually, I think I’m still in shock, and they’re now two!  My mom was the first person I told.  We had her on speakerphone, and she kept saying over and over… “Caitlin, stop playing a joke on me. Are you serious? No. I don’t believe you. There were two heartbeats? You’re not having twins.  Ben, is she kidding?”  It was my husband that finally convinced her that I was telling the truth.  She was just getting home, and she said “if you want to tell your father yourself, you need to call him now! I just got home and I won’t be able to keep it a secret!”  My dad answered the phone and as I told him I heard my mom run through the door and shout “they’re having twins!” Thanks, mom!  Telling the rest of our family went about the same, everyone was crazy excited and shocked.

Looking back, I have to laugh at my smug attitude when I thought I could plan out my life and children exactly the way I wanted to.  As you will read later, my twins came almost two months early; their birthday is only two and a half weeks away from Theo’s birthday.  So, instead of having not quite two under two, I ended up with three under three, for almost a year (354 days to be exact).

We knew we wanted to announce somehow that Theo was going to be a big brother and then as an afterthought mention that it was twins. I thought it was more shocking that way and for some reason, I wanted to surprise everyone as much as I was surprised. We had the idea to make a little video collage and did it on flipagram. Two years later (and a year into blogging!), I probably could have made the video much better quality, but I still love watching it.

(Here are the pictures if you don’t feel like watching the video.)

We did an elective ultrasound at around 16 weeks. By this point, I was so fatigued and achy, that I didn’t have the capacity to plan an elaborate announcement. Ben, Theo, and I went by ourselves. We asked the ultrasound technicians to not tell us, but to write it down, so we could find out in a more intimate setting.  I brought a little gift bag with 2 blue and 2 pink bows and asked them to wrap the bows up for us.

Back home, we put Theo to bed (the longest bedtime of my LIFE!) and then opened the bag with the bows. I had a feeling it was going to be two girls, because the ultrasound tech had asked if we had a preference, and we told her we’d love a girl since we already had a boy. I knew I would love my babies regardless, but having twin boys on top of an older brother wasn’t my first choice! The tech said to me “Oh, I wish I could see your reaction when you find out!” in an excited voice, so I had a strong hunch that it was twin girls. Very annoying that she did that, but I didn’t let it damper my mood.

A few days later, we took a picture of the bows on my stomach. Nothing super fancy, but it was cute and worked for us!

I hope you enjoyed this post because I loved reliving the memories as I wrote it. It was one of the most exciting times in our life!

Previous
Siblings Fighting: How to Prevent it and the Best Way to Respond 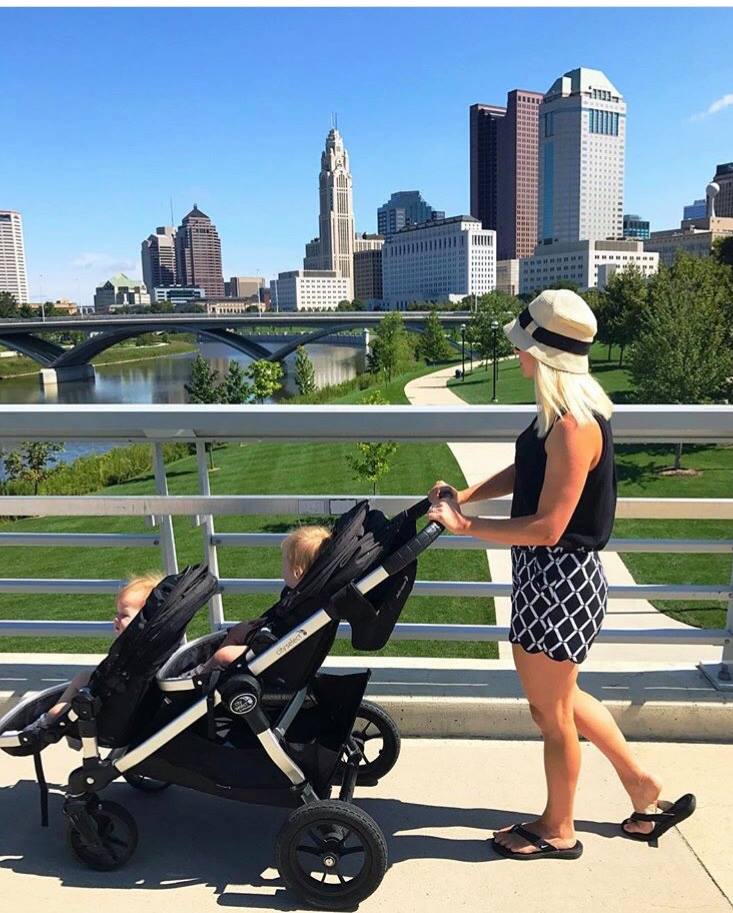 Next
How to Safely Take Toddler Twins Out in Public Alone
Click here to cancel reply.