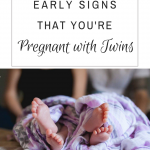 Twin pregnancy at 4 weeks… you definitely don’t know that you’re having twins and you might not even know that you’re pregnant at all yet! But if you DO know, you may have noticed an immediate positive pregnancy test OR a test line that was darker than the control line. More on that in a bit!

like me, you were planning and trying for another baby, you might have a positive pregnancy test, but there’s no way you will know FOR SURE, that you’re pregnant with twins at only four or five weeks pregnant.

You won’t really have much going on with your body, other than a missed period.

If your periods are irregular or you don’t track them, you may not even realize that you’ve missed it!

It is also entirely possible that you start to feel symptoms this early and experience early signs of twins at 4 weeks.

Pregnancy symptoms resemble premenstrual symptoms, which is incredibly annoying, so it can be difficult to tell.

Many women (myself included!) experience a variety of pregnancy symptoms right before missing a period. If you’ve come to this post, you’re probably experience these symptoms and questioning whether or not you could possibly be having twins.

Here are some early signs of a twin pregnancy, based on my experience AND things I have heard from other twin moms.

If you have a very dark line on your pregnancy test, it could be twins!

HCG is a pregnancy hormone that is detected by the line on your pregnancy test.

The darker the line on your pregnancy test, the more HCG is present in your body.

That’s why it’s advised to wait until after your missed period, so the test line will be dark enough that there is no mistake as to whether or not you’re pregnant.

The line on my test was VERY dark at 4 weeks pregnant with twins and there was no mistaking it at all!

I tested exactly 14 days after I because it was our anniversary and I wanted to share the news with my husband if I was pregnant.

When you become pregnant, your body starts producing pregnancy hormones.

Twin pregnancies have twice as many hormones flowing through your body (two times the babes = two times the hormones).

The changes in hormones in your body can cause a lot of symptoms, and the biggest is nausea, also known as morning sickness.

Increased morning sickness, especially early on, could indicate that there are two babies growing inside of you!

Morning sickness doesn’t usually happen until right around week 5 or 6, but some women definitely experience it early.

I swear by these tummy drops. They helped me with my morning sickness SO much. They have a huge variety of flavors, but the ginger peach and peppermint were my favorites!

If you start packing on the pounds early on in your pregnancy, make sure your ultrasound technician is extremely thorough to ensure that a 2nd baby isn’t overlooked.

It is hard working growing one baby. It is even harder growing TWO babies! Increased fatigue that does. not. let. up. could be a sign of .

Fatigue and extreme exhaustion will happen most commonly beginning between weeks 5-6 but it happens earlier for some women. I was slightly tired during my 5th week of twin pregnancy, but the fatigue didn’t hit me extremely hard until a little bit later in my twin pregnancy.

Other Posts You Don’t Want to Miss…

Don’t forget to start taking your prenatal vitamin! These are my favorite because they are organic and made from whole-food ingredients. They are also delicious and super easy to take while dealing with all of the ickiness of the first trimester. I could never swallow a big pill or have something really strong tasting, but these are nice and light.

How Big Are Twins at 4 Weeks?

At 4 weeks, your babies are merely two little gestational sacs! At this point in a twin pregnancy, twins are developing at the same rate as a singleton.

You definitely won’t have a bump at 4 weeks! There may be a small bit of bloating, but that’s it. Your pregnancy (if you even know about it!) will still be very easy to disguise.

How Big Are Twins at 5 Weeks?

By 5 weeks into your twin pregnancy, your twins are about the size of seeds!

At 5 weeks of a twin pregnancy, your bump will still not be a true bump, but there will definitely be some bloating. I know that I definitely felt like I was getting a bump, but it was invisible to the rest of the world. If it is a 2nd or 3rd pregnancy, you will likely get bigger faster as well.

My Twin Pregnancy Experience at Week 4 and Week 5

I found out I was pregnant at exactly 4 weeks.

I was overjoyed, but also struck with a feeling of… oh my goodness, another baby! What have I done! Our first, Theo, was only 15 months at the time and not even walking yet!!

I knew that I was pregnant the night before I took the test because I was moody and Ben and I got in a fight over absolutely nothing.

Right in the middle of our fight, I was like oh snap, I’m probably pregnant! Haha!

I woke up super early the next morning so that I could take a test first thing and hopefully surprise my husband on our anniversary.

To my shock (and delight… but mostly shock!!!) the second line on the pregnancy test showed up, pretty dark, and right away.

It wasn’t like with our first pregnancy, where I took the test and then had to wait a few minutes for the results. Nope. I had an immediate positive pregnancy test. Looking back now, there were so many signs!

Unfortunately, I wasn’t blogging at that point, so I don’t have an overload of pictures for you like I would if it happened today.

However, this is how I greeted my husband on the morning of our anniversary! Happy Anniversary, babe! If only we knew that we were actually pregnant with twins!!!

We were right in the throes of the young toddler stage, and while Theo was an absolute delight as a baby and toddler, it was going to be a big change (even bigger than we expected!!).

I already had a pregnancy journal in anticipation of getting pregnant, so I was able to record my entire pregnancy, from before I even knew that I was expecting twins!

I loved having a pregnancy journal and it’s so fun to look back on. I highly suggest getting one!

“Wow! Just… wow. We have another little blessing on the way. As the second line popped up, I was scared. What have I done? Life as it is over! It was so awesome to find out on our anniversary and put the test in Ben’s card :)”

At 5 Weeks Under How Are You Feeling, I wrote
I feel slightly more tired than but pretty good. No sickness yet, but I am very emotional!”

4-5 Week Twin Pregnancy: What You Should Do

Once you confirm with an at-home pregnancy test that you are expecting a baby, you should call your doctor to set up an initial appointment.

You should also start taking your prenatal vitamins if you haven’t already been doing so.

Frequently Asked Questions at 4 and 5 Weeks Pregnant With Twins

Since I get so many questions, I thought I’d go ahead and answer the most common questions that get e-mailed to me here in this post. You’re always welcome to e-mail or DM me if you don’t get your answer!

How dark should a pregnancy test line be at 4 weeks?

It can be confusing if you have a line show up that’s very faint and hard to detect. It’s important to know that even if your line is super faint, it still means that you’re pregnant.

A dye stealer is when the HCG levels are so high that it is pulling the dye from the control line, making the test line darker. HCG levels vary greatly from pregnancy to pregnancy, so it is very hard to predict with accuracy whether or not a dye stealer test means you’re having twins. However, it is definitely an indicator of a twin pregnancy.

YES- a darker line on a pregnancy test means your HCG (Human Chorionic Gonadotropin) levels are on the high end. And, as I mentioned above, even though it isn’t conclusive evidence, a darker line can definitely mean that you’re pregnant with twins.

When will I know if I’m having twins?

There is absolutely no way to know whether or not you’re having twins until an ultrasound is done. Most doctors will schedule an ultrasound somewhere between 6 and 10 weeks of pregnancy to confirm the pregnancy and check for multiples.

What are the chances of having twins?

You have approximately a 3.35 chance of having twins naturally, without the help of any fertility treatments.

Why is my test line darker than the control line?

When your test line is darker than the control line, it means that your HCG hormone levels are high enough to steal dye from the control line. Remember, this is called a dye stealer test.

What does it mean if I have an immediate dark positive pregnancy test?

It could simply mean that the pregnancy test you’re using is very sensitive. However, it could also mean that your HCG levels are already elevated pretty high!

Does a positive pregnancy test at 3 weeks mean twins?

As I’ve mentioned a few times, a pregnancy test cannot accurately determine whether you’re carrying a singleton or multiples…. but if your hormone levels are elevated enough at 3 weeks to give you a positive pregnancy test, there is a small likelihood that you are carrying twins. I know it can be frustrating that it is such a guessing game and that there’s nothing conclusive until you have an ultrasound.

It’s simply the case because HCG levels vary so drastically from woman to woman!

How dark should a pregnancy test line be at 5 weeks?

If you had a positive pregnancy test at 4 weeks and are testing again at 5 weeks, your test line should be considerably darker at 5 weeks.

What does it mean if I don’t have any pregnancy symptoms at 4 or 5 weeks pregnant?

If you receive a positive pregnancy test at 4 or 5 weeks and have no symptoms, that’s completely normal. Pregnancy symptoms usually develop between 5 and 6 weeks, but some women experience very mild symptoms in the first trimester.

Hello, We have been trying for another baby for about 18 months i fell pregnant 4 months ago but lost it at 7½ weeks and then fell pregnant again 2 months ago but lost it at 4 week. Now 2 months later at 3 weeks 1 day (8 DPO) i took a first response test and I was absolutely overjoyed to see a very dark ( for that early) line appear. Im crossing my fingers that its multiples so far my only symptoms have been extreme moodiness/irritability. Constant bathroom breaks and loads of gas and belching. The latter i never experienced with our other 3 children.