You guys, it has been a whirlwind.  There’s no other way to describe the way our lives have been recently.  If you’ve read my previous posts, you know that we sold our house in Ohio and visited Rhode Island a few weeks ago to look for a house there.  When we were in Rhode Island, we narrowed down the area we want to live in.  It’s a really cute area with older homes (think late 1800’s-early 1900s!).  You can walk to the bay, and there is a really cute little downtown area within walking distance that’s full of shops/restaurants, etc.

The only problem with this area that we fell in love with is that older homes typically only have 1 full bathroom.  I can think of no bigger deal breaker than having to share a bathroom with two teenage girls (granted, we are many, many years out from this, BUT STILL).  We looked at a few houses that had 2 full bathrooms, but nothing felt right.

Our requirements in a house were: 4 bedrooms (or 3 bedrooms and an office), 2 full bathrooms; we weren’t overly concerned about square footage… I’ve never wanted a super big house because then I have to clean the entire thing.

There was one house that we LOVED… but it was at the top of our budget and needed some work to become the floorplan that we wanted.  At almost 3000 sq ft, it had SO much potential.  There was a finished attic that Ben could use as his office! It did have two full bathrooms, but 1 was upstairs with the bedrooms, and the other was downstairs off the kitchen.  Why in the world would someone put a full bathroom off the kitchen??  So I was trying to think of ways we could add a master bathroom upstairs, or turn one of the living spaces downstairs into a master bedroom and have that bathroom be ours.  In the end, we felt that it needed too much work to make it ours.

On our drive back to Ohio, we decided this house wasn’t meant to be.  As sad as I was to give it up, I knew there was no way we could afford to make it what we wanted.  Since there didn’t seem to be much in the area with 2 full bathrooms, we decided to consider 1.5 bathrooms.  After all, our kids are still young enough that they don’t need their own bathroom.  In a few years we could rent it out and buy something that would suit us better long term.

We told our realtor this, and she thought it was a good idea (she had suggested we consider 1.5 baths several times anyways haha).  That house had an open house on Sunday, so we figured it would get an offer anyways.  Well, our realtor called us on Monday and said that it hadn’t received an offer, and the seller was very motivated.  She suggested we make an incredibly low offer (about 100k lower than it had originally listed for) and get it at a price that we are comfortable and using it either as an in between house, or in a few years, put money into remodeling it to the floor plan that we desire.

Ben and I both thought this was a great idea.  Even though we had settled on finding a smaller house for a few years, I think once we got back to Ohio and he was working from our basement, our opinions changed slightly.  Our kids can be LOUD.  Living in a house that is the same size or smaller than our current house was going to be tough with Ben working from home part time.  So, when our realtor suggested this, we both thought ‘hmmmmm, this could work!’

On Tuesday, we got a call from our realtor.  There was another offer in on the house, and we needed to give our best and highest offer.  We went back and forth for hours.  The house needs all new windows, we don’t want to offer too much and then be broke as a joke!  We went over our budget and agreed to up our offer and texted our realtor.   We still thought there was no way we would get this house, because our offer was soooooo low compared to asking.

“You’re kidding me” I said, with a sinking heart, thinking that this meant we would be asked for our next highest offer.  There’s no way we could offer more money.  “She chose you guys” our realtor said.  “The other offer was from a single guy, and she went wouldn’t stop talking about how she wants a FAMILY to live in this house.  She chose you guys because you have kids!”

I’m so at peace that this is meant to be.  This is the house we are going to turn into our home. 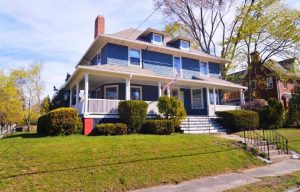